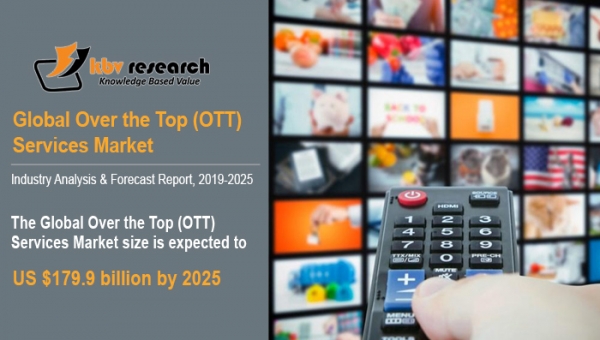 According to a new report  Over the Top (OTT) Services Market, published by KBV Research, The  Over the Top (OTT) Services Market size is expected to reach $179.9 billion by 2025, rising at a market growth of 14.3% CAGR during the forecast period. An increase in OTT demand in developed countries, rise in SVoD services in emerging markets, an increase in content diversity, an increase in demand for live streaming channels, the development of new OTT markets and new developments in OTT technology are key factors in boosting market growth. Nonetheless, the lack of data network infrastructure and latency problems is expected to impede OTT market growth.

On the basis of device type, the smartphones segment was dominant in the overall OTT market in 2018 and is projected to sustain its dominant position over the forecast period. This dominant position can be associated with the increased adoption of smartphones to stream OTT services and an escalating market for larger screen smartphones in the developing economies. The Desktops &amp; Laptops market is anticipated to grow at a CAGR of 14.9% during (2019-2025). Additionally, The IP TV’s &amp; Consoles market would witness CAGR of 15.7% during (2019-2025).

The media &amp; entertainment industry captured a stronger market position in 2018 and is projected to remain dominant over the forecast period due to an increase in the number of digital video users. This is projected to increase the demand for OTT services in the media &amp; entertainment industry. The Gaming market is exhibiting a market growth rate of 14.5% during (2019-2025). Additionally, The Education &amp; Learning market is expected to witness CAGR of 15.1% during (2019-2025).

The video content segment witnessed the highest growth rate in 2018 and is projected to continue this trend over the forecast period due to the rapid roll-out of new technologies contributing to video consumption.

As North America is the most developed region, it hosts to large verticals that are capable of investing in robust and specialized IT infrastructure for rising data traffic, opening up new opportunities for OTT solutions. The Europe market is estimated to witness a CAGR of 13.5% during (2019-2025). Additionally, The Asia Pacific market is poised to grow at a CAGR of 16.4% during (2019-2025).

The market research report has exhaustive quantitative insights providing a clear picture of the market potential in various segments across the globe with country wise analysis in each discussed region. The key impacting factors of the market have been discussed in the report with the elaborated company profiles of Twitter, Inc., Microsoft Corporation, Google, Inc., Amazon.com, Inc., Apple, Inc., Facebook, Inc., Netflix, Inc., The Walt Disney Company (Hulu LLC), Tencent Holdings Ltd., and Roku, Inc.

Recent Strategies Deployed in Over the Top (OTT) Services Market